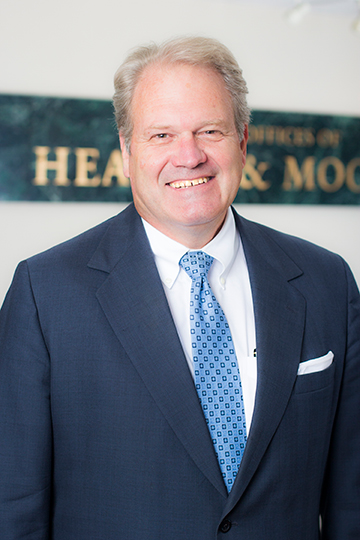 Mr. Moore moved to Memphis, Tennessee, in 1984 where he became an equity partner in the law firm Thomason, Hendrix, Harvey, Johnson & Mitchell. In February 2003, Mr. Moore joined his brother-in-law, William W. Heaton, as partners in the new law firm of Heaton and Moore, P.C. Mr. Moore is a trial lawyer who focuses his practice in the areas of medical malpractice, products liability, toxic tort litigation, and insurance defense.

Mr. Moore was a charter member of the Leo Bearman American Inn of Court, is active in the International Association of Defense Counsel and has achieved an “AV” rating by Martindale-Hubbell Legal Directory indicating a “very high to preeminent legal ability and very high ethical standards as established by confidential opinions from members of the bar.” He was also presented with the Best Lawyers of America award from 2006-2017.

Mr. Moore is married to Donna Holder Moore, and is the father of two children, John and Rebecca. The Moores are active members at Bellevue Baptist Church and enjoy a wide range of outdoor sports and activities.